Could you manage an island in a sustainable way? What kinds of decisions would you make? Could you learn from your past mistakes and build a better world? A digital simulation developed by this creative international partnership of Poland, Slovakia and Hungary has proved a great way for youngsters to learn more about environmental issues and think about improving their own futures!

Aleksandra Solinska-Nowak, the Project Coordinator for creating the New Shores game, told us more about its two-year development process:

What competences does the game develop?

The New Shores game is a multiplayer, online game that can be played on tablets or laptops and offers a social experience. It improves young people’s awareness of their environment, develops their communications and mathematical skills, and builds trust between students. It also demonstrates how their actions have an effect on their surroundings. For instance, on their virtual island, players can learn to predict the environmental outcomes of certain actions, such as cutting down trees or burning coal as fuel. Students take part in groups, but each group member gets to take individual decisions and can see the consequences.

How can they make use of what they have learned?

Each gaming session is followed by a moderated discussion, where players can air their thoughts and feelings. We ask them to reflect on what would happen in the real world if they continued exploiting the resources as they did in the game. We compare the original, beautiful, green environment to the island that was left polluted by the decisions they took. Although this takes place in a virtual world, it really helps to highlight the challenges involved in using natural resources, and the importance of both personal responsibility and the actions we take as a community.

Who is this simulation aimed at?

The game is designed for young people between the ages of 13 and 30. However, it was crucial to reach out to professionals who wanted an interesting and fun educational tool to use with the groups of young people. Just a few examples, teachers in public schools, youth workers with informal groups or NGOs, librarians, educators and scout leaders have been interested in using New Shores. Rather than trying to deliver lots of dry, theoretical information, we concentrated on creating an engaging game that would get youngsters expressing their opinions and discussing the issues it raises. In this way, teachers or group leaders can direct the debate without having to be at the centre of it.

Let’s go back to the beginning. Where did you get the idea?

Back in the 2000s, we had started to organise computer modelling workshops in Poland, and used games. Participants just loved it! That’s how we came up with the idea of making ‘gamification’ – creating fun games that serve as serious education tools – the focus of our organisation. We soon took up the challenge of publicising sustainability ideas across Poland and Europe, and were fortunate to meet our future Hungarian partner who has a person-centred approach to education. We began working together on a project focusing on games that would address social responsibility and sustainability issues, and applied for a grant.

Can you tell us about your development team?

It was a great meeting of minds and skills! Since TANDEM n.o. (our Slovakian partner) works with youngsters daily, they came up with the methodological design for using the tool with young people. With experience in new teaching methods, the Rogers Foundation in Hungary became responsible for publicising the game and organised an e-learning course for teachers and educators who wanted to try it. Our organisation meanwhile managed the actual programming and graphic design of the game. We also collaborated on translating the game and all accompanying materials, which are now available in English, Polish, Hungarian, Slovakian and Greek!

Which were the most important phases of the project?

Before we started, we brainstormed about what kinds of values and effects we wanted to achieve, and what game elements and mechanisms we should use. The first year was spent co-creating and testing the tool with users. As part of our partner meetings in Poland, Hungary and Slovakia, we also went into schools and organised testing sessions to see how the game went down with youngsters in different national settings. The feedback collected during these testing sessions helped us in organising training sessions and setting up a helpdesk for future moderators in the second year.

Sure. The testing sessions revealed big differences in the educational and cultural backgrounds of our target countries, so we had to work closely to find solutions that we could apply for each audience. Feedback from youngsters also shaped our priorities, which helped us to identify what worked and what needed revising. We often had to remind ourselves that the partnership’s vision of a great product was not necessarily the same as those who would actually use it!

What were the important moments of learning for your team?

We learned that even our best ideas had to be tweaked to satisfy our users. Compromise was sometimes essential. We also knew that there would always be improvements to make, but we had deadlines and releasing the game was our priority.

How did you keep partners motivated?

The feedback we got from running the training workshops, and especially from educators, proved to us that we were creating a tool that people were enthusiastic about and really wanted to use. When you are developing something that has such an obvious value, you feel determined to carry on, no matter what.

How did you reach and involve participants in the activity?

We needed to create a marketing strategy for reaching as many potential users as possible. Fortunately, all of the partner organisations already had extensive networks of schools and relevant organisations. Though we could reach them using our social media channels and putting up posters in schools, informal test sessions done in all partner countries provided us with the best occasions to meet in person with teachers. It really paid off because they shared their experience with other teachers and helped us get the word out.

The last thing was the e-learning platform where people can find materials on how to use the game. Even though the project officially finished in 2019, we still have new users who join the platform. It is a good idea to put educational tools to a visible place and to make them available for everyone, because free educational materials will always be attractive for educators.

Do you have suggestions for others who would like to realise something similar?

If you believe in your idea and think it will help others, go for it! But before you commit, make a point of researching the experiences of other projects first! Looking at previous projects may help you formulate your own ideas. Also, be honest with yourself about whether your ideas are realistic! In our project, for instance, we tried not to achieve the impossible and concentrated on what was important to reach our objectives.

The game is awesome! It showed us how we affect the world around us. Every person has an effect on the climate, environment, and the community we live in. Looking at what we did on the island made us all realise that none of us wants to see the destruction of our world. It does not matter if I am rich when people around me are poor; and it does not matter if I have a pool when we have no wood to develop. Before playing, I never thought about this stuff, but making decisions together and thinking about others, even when we cannot agree 100% with the outcomes, is important. We all just want to be happy, and I think that New Shores is showing us a way to be happy together. 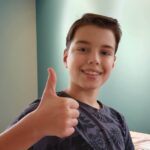 To date, the New Shores game has registered players and teachers in 12 countries: Poland, Slovakia, Hungary, USA, Germany, Greece, India, Italy, Turkey, Ukraine, Austria and Spain. At the Educators’ Challenge Awards’ Ceremony (organized by the Global Challenges Foundation), the game was recognised as being among the most creative and effective projects of 2019!

At the Centre for Systems Solutions I mostly coordinate international projects, managing contacts with our foreign partners and ensuring timely and efficient development of our simulations. I am also responsible for the edition and proofreading of our texts in Polish and English. As one of the co-editors of the Games4Sustainability blog, I regularly do research and publish posts about games and simulations that support the idea of sustainable development. When not at work, I’m probably outdoor, hiking, biking or sightseeing.

A multiplayer, online game for educational purposes was developed.

New Shores – a Game for Democracy

How is the game used? You can discover it through a simple e-learning course. Find instructions on how to register on the website.

In the course of this project more than 450 educators, librarians, and youth workers from across Poland, Slovakia and Hungary (148 educators by train-the-trainer workshops and over 300 educators via e-learning course) were reached; 200 people tested the game and participated in moderator training. The number of people who played the New Shores game during the project’s implementation worldwide: 9750.