Sextortion is a crime where the criminal, in exchange for not uploading someone’s pictures or videos with a sexual content, extorts money, more similar materials or sex. Sextortion is a word that Europol has decided not to use when it involves children as victims. They prefer to refer to these as the online sexual coercion and extortion of children, as it describes the crime better.

In a nutshell, sextortion is all about persuasion through messages. To understand when someone is trying to influence you is difficult but not impossible. MIL skills in learning how to recognise those signs are crucial.

Through the media we have probably heard stories about adult sextortion cases, mostly because of famous people who have been victims. A case in which someone’s accounts are hacked and the hacker uploads their sensitive material only because he wants to get famous is not sextortion, and it is usually prosecuted as a hacking crime.

In those cases, the victim is usually female. She might be dependent on the offender and is degraded, scared and feels powerless. Victims in these sextortion cases tend not to turn to the police for the same reasons as victims of rape. There can be mistrust of the police, shame, victims are afraid that they do not have evidence to prove their statements, etc. If all the other mentioned sextortion cases can happen to everyone, then in these cases women and LGBT community members are at higher risk.

The third most common way is blackmailing and again there are different approaches. One is the lazy blackmailer who sends thousands of letters to random email addresses with text to the effect that, “I hacked your account and have seen what kind of porn pages you visit and have recorded you behind the computer while you watched the videos”. By this, they hope to scare people into sending money (mostly bitcoins). The other one is more sophisticated: criminals buy old passwords. At the beginning of 2019, news emerged about password collection by hackers when a website shared 770 million email addresses with their passwords. They send exactly the same letter to the victims as before, but they add this account’s old password to give more credibility to the letter. This is something that shocks people, even though, if they have followed the simple digital hygiene rules and change their password after every two months, the password in the letter is probably 1-2 years old and cannot be used anyway.

There are also some other ways of how one could potentially fall victim to a sextortion crime but compared to the main types this has not that many numbers of victims. This involves having sex with strangers while travelling. Lately, there have been cases all over the world where people on holiday have sex with locals in their homes or hotels and receive extortion messages afterwards. Usually, the sextapes have been made secretly with hidden cameras. Also, there are hackers who create viruses to get access to victims’ social media accounts and if they find nude photos in the albums or chats, they send letters to the victims and demand more pictures and videos.

One thing is for sure. Sextortion always has a big influence on the victim’s mental health. As a police officer, I have seen how this also affects the family members because it is quite common for the victim to have suicidal thoughts. I have answered emergency calls where men say that if their family finds out they will kill themselves immediately. I have been chatting with children who have parents 10m away from them but they refuse to ask them for help. Body image and sexuality are hard topics for most teenagers. This case is also difficult for parents because they have no power to stop the distribution of such sensitive materials, and they often blame themselves for being a bad parent, not being there for their child and not explaining the dangers well enough.

How to prevent sextortion? The key words are target group, social and digital skills, and scam awareness. In these cases, the approach to the certain target group is always different and it means we have to have a specific prevention method for every group. For example, blackmailing letters do not work on children because they are more aware of those scams and do not have the money anyway. It would be good to have an online training centre where people can learn the signs of different scams and how to deal with them. However, the best prevention method for most of the scams is the smart use of search engines. Scam awareness has been a goal for several organisations, from Europol to local youth centres. Real stories matter. When people have better digital skills to find those already existing materials, there will be fewer victims. 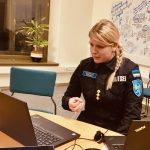 The transformation of young people’s online and offline leisure time, spaces and media use in Hungary

Educating for democracy?: The role of media and information literacy education for pupils in Swedish compulsory school

PARTISPACE Policy brief no. 1 Spaces and Styles of Youth Participation Key Findings and Recommendations for Policy and Practice

The Nature of Geographic Information

A Handbook of Children’s and Young People’s Participation: Perspectives from Theory and Practice

Snippets of information that an organisation wants to relay to its target audiences; they consist of information the organisation wants its target groups to hear and remember.
Digital skills are broadly defined as a range of abilities to use digital devices, communication applications, and networks to access and manage information. The use of digital competences is sometimes preferred to better describe the entire spectrum of what an individual needs to do and know when dealing with digital technologies, including knowledge, skills and attitudes.
The activity of sending, receiving or forwarding sexually explicit messages, photographs or images, primarily between mobile phones, of oneself to others intended to sexually excite someone.
The unauthorised intrusion into a computer or a network. The person engaged in hacking activities is known as a hacker.