The fourth industrial revolution is already here. So what role is played by robots?

Over recent decades, industrial robots have been crucial in supporting work processes and operations, especially in manufacturing, product lines etc. While in the past robots used to perform primary operations and repetitive tasks, currently modern robotic systems have evolved in such a way through advanced digital technologies that they can perform complex tasks, resulting in higher interconnectivity, operational efficiency and enhanced productivity.

One important distinction should be noted when speaking about robots and traditional forms of automation. Robotics refers to creating and using physical robots to perform certain tasks, while automation processes involve machines and computer software to conduct specific sequences of operations or actions.

Although there might be similarities, the terms are not used to describe the same type of technology. For example, a response from an automated chatbot uses automation without robotics, but when a robot assembles pieces in a product line, this is a case of automation and robotics. And lastly, when a physical robot acts independently without a given set of repetitive tasks, it’s only robotics, without automation.

Another essential difference: there is one type of software automation called “Robotic Process Automation” (RPA), which, despite its name, is totally different from robotics, as RPA technology involves software robots to perform actions given a set of rules, as a human would have done in the same way.

The use of industrial robots is increasing every year by approximately 14%, according to recent data, and the fourth industrial revolution is now led by the advancement and use of robotics, Artificial Intelligence, Internet of Things technologies. This means that in the future, factories will have humans and robots working side by side, performing different duties.

Robotics technology presents great advantages to the future of work – including increased work productivity and efficiency, reducing human errors and saving time and money. Although there were fears of robots replacing humans, only around 14% of jobs might be automated in the future according to the OECD’s report. This means that the young people and the next generation of people entering the job market need to focus on improving their digital skills. They will also be able to focus on innovation, out-of-the-box thinking and creativity in performing their new tasks, shifting from the previous repetitive duties that could be conducted by robots in the future. 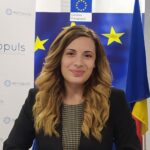 Co-creation of youth-centred digital transformation: the story so far

Digital skills are broadly defined as a range of abilities to use digital devices, communication applications, and networks to access and manage information. The use of digital competences is sometimes preferred to better describe the entire spectrum of what an individual needs to do and know when dealing with digital technologies, including knowledge, skills and attitudes.
The Internet of Things (IoT) describes the network of physical objects—“things”—that are embedded with sensors, software, and other technologies for the purpose of connecting and exchanging data with other devices and systems over the Internet. These devices range from ordinary household objects to sophisticated industrial tools. Key IoT areas include smart living environment; smart farming and food security; wearables; smart cities and smart communities; smart mobility; smart environment and water management; smart manufacturing etc.
AI refers to the simulation of human intelligence in machines that are programmed to think like humans and mimic their actions. The term may also be applied to any machine that exhibits traits associated with a human mind, such as learning and problem-solving.The ideal characteristic of artificial intelligence is its ability to rationalise and take actions that have the best chance of achieving a specific goal.