Much of the current debate around the social implications of  automation and other emerging technologies is shaped by dichotomies. For some, automation may improve living standards, better service provision and accessibility, and better connectivity and opportunities. For others, automation equals economic disruption, job displacement, rising inequality and a digital divide.

Building on this, decision makers are faced with answering important and pressing questions such as:

Essentially, when thinking about automation, it should be understood that automation isn’t new – humans have been employing technologies to automate tasks and replace physical human labour for centuries (remember the steam engine and electricity?) What we need to be mindful of when thinking of the current automation initiatives is that we shouldn’t delegate cognitive tasks to machines. Technologies should be used to optimise processes, workflows, and tasks, in order to conserve human time and energy and deliver the best user experience; they should enhance human skill and compensate for human limitations (by complementing — rather than competing with — human activity).

In order for automation to become a driver of positive societal change, stakeholders need to look at embracing the paradigm of automation for good, which is deeply rooted in the United Nations 2030 Agenda for Sustainable Development. To address this sustainability concern, as well as the issue of whether robots will take over the world, decision makers need to make sure that the development, design and deployment of automation meets several requirements:

At the end of the day, we should ask ourselves: Could robots tick the “I am not a robot” captcha box? 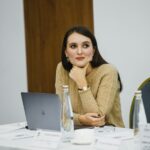 Irina is a techlaw and intellectual property attorney, currently pursuing her PhD research in AI regulation with a focus on the legal status and accountability of AI. She is an emerging technologies fellow at Europuls, as well as a Algorithmic decision making cycle co-lead at the Institute for Internet and the Just Society. Most recently, she became part of the AI literacy expert group of the Council of Europe and a member of the European AI Alliance.

Report A “Roadmap for the delivery of eParticipation: lessons learned from the STEP project”

MOOC on Erasmus Plus: Design Your Participatory Approach

Among Us and Civilisation to Train Decision Makings Skills

The future of work in Europe

DigiGen: research into the impact of technological transformations on the Digital Generation

Digital divide usually refers to the different gaps existing in society in terms of access to digital technologies (eg. computer, smart phones, Internet). The gaps are related to the demographics (age, education, economic status) but also to regions (depending on the level of access and affordability of Internet and technology there are significant differences between the global regions). Recent focuses have looked at digital divide in terms of those who can benefit from ICT and does who don’t from a wider perspective – including access to different digital (public) services, emerging technologies as well as opportunities for improving digital competences.
a person, business or organisation with an interest or concern in a charitable project
A set of measures that enable persons with disabilities access to something on an equal basis with others. This applies to, for example, access to the physical environment, to transportation, to information and communications, including IT and communications technologies, and to other facilities and services open or provided to the public, both in urban and in rural areas. (UN Convention on the Rights of Persons with Disabilities)