In digging deep into the history of their black community, a project devised by five young people has helped to bring Amsterdam’s hidden ancestry to light. Their programme of fascinating excursions and events has inspired other youngsters to explore their local past, appreciate their city in new ways and realise their chance to make history too!

Being present is the first step of participation. Even if the person doesn’t contribute to an activity, by listening and watching they are still taking part in what is happening and adding to the overall experience. As educators, our job is to communicate a story and a message that they can take home. 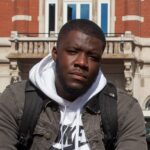 Coordinator and Team Member Revelino Pinas told us about their project:

What were the main objectives of the Building Strong Communities project?

We focused on researching, presenting and reflecting on the past of slavery. With my friends we wanted to take people back in time to make them think about where they come from, which might give them a better understanding of who they are, and where they want to go. We believe that if young people have a strong sense of identity, they will find it easier to fulfil their potential. Also, if they learn about the terrible history of slavery, they will appreciate the efforts people have made so that they could be free today.

What activities did you do?

As the project follows the format of a Solidarity Project, we organised local activities in Amsterdam city. We visited different locations and invited experts to our groups, with around 15-20 participants each time. We organised a city tour explaining black history and listened to readings about slavery. Then we visited the slavery monument in the Oosterpark and the exhibition Afterlives of Slavery at the Tropenmuseum, an impressive museum of world cultures. While at the Black Archives, which houses a fantastic collection of books about black activists and movements, we learned about Dutch colonialism and the life of Anton de Kom, who fought against it.

How did you get involved in this project?

All of the team members knew each other from the musical organisation Percussionband Eternity based in the diverse, multicultural Bijlmer district, also called Amsterdam Southeast. In the summer streets pulse with life, and it attracts a lot of artists and rappers. Some consider it dangerous, but there are good initiatives such as ours that keep teenagers out of trouble. As a teenager I wanted to play the drums, so I joined local musical workshops. Fourteen years later, I have become one of the musical leaders of the group teaching kids. We organise performances, theatre shows, weddings, birthday parties and so on. Music is our main source of inspiration: it is a means of self-expression but also a useful way to teach children about concentration and perseverance.

Who were the participants at the events you organised?

We had a different group for each one, as we wanted to reach as many young people as possible. The youngest participants were about 13 years old, the oldest 28 years old. Their family histories were often very diverse, originating from Suriname, Curaçao, Ghana and the Antilles, but some had been born and grown up in the Netherlands. Even for participants who didn’t have any personal connection to the topic of slavery, they understood how painful the subject was and wanted to understand more about its background.

How did you engage participants during the activities?

We designed presentations in a way that would catch their attention and reveal interesting, new information. Being clear and direct worked well! After the city tour, we found that people showed more interest and got into deeper discussions about the subject. It was a touching experience for all participants to see a new dimension of the city, walking along streets and seeing beyond the usual urban environment. During the tour they discovered that the whole city of Amsterdam had important links to slavery, and its buildings still preserve these memories.

What were the main successes for your team?

Creating an emotional bond with the past was important. At the slave monument, for instance, we could feel the sorrow of people that were enslaved even after all those years. I still carry that story with me. We also realised how important it is to take young people to the places where things actually happened, not just exchange images in Snapchat or Instagram. Finding a different way to engage them, using storytelling and real-life experiences, can make history come alive. As a group, we have learned a lot by running activities, particularly about setting objectives, planning and the best ways to deliver activities.

How did you organize the excursions?

Otmar Watson, managing director of Untold and secretary of Percussionband Eternity, coached us in the administrative aspects and managing the budget. Apart from that, we did everything ourselves. After the project application was approved, we divided the roles between ourselves, discussed every task and began implementing it. My responsibility was to coordinate the events, contact relevant people and manage social media. Every time we went out, participants really appreciated all our efforts, even our making sandwiches for the group. My colleagues planned the logistics, set the meeting time and place, the route, which bus to take and so on, while another team member booked the speakers and guides for the tours.

How did you promote the events?

Our strategy included using our personal contacts, the band’s Facebook page and our Instagram profile as well.

Were there any difficulties to overcome during the year of the project?

On a personal level, organising the project was a real challenge because we really needed to take care of everything! On a group level, the biggest obstacle has been the pandemic, as we had to stop the activities during the lockdown of spring 2020 and postpone some of our plans.

Do you have a suggestion for others wanting to create a project?

First, it is a good idea to decide exactly which age groups you want to inspire: kids, adolescents or young adults. Then you can think about how to transmit the message! Effective teaching relies on being able to communicate well with young people. I know how much teenagers (and even older people) struggle with learning, but if we put heart, patience and empathy in everything we do, we can inspire youngsters and build a better tomorrow.

This project played an important role in promoting the European Solidarity Corps programme in Southeast Amsterdam. Through its programme of museum visits and city tours, young participants discovered their connections to the past, opening new perspectives and ways of learning about their city.

Revelino Pinas is 26 years old. He lives in Almere but used to live in Amsterdam. He was 14 years old when he joined Eternity Percussion with whom he travelled to Gambia, Curaçao, Brazil, London and many more countries. Because of that his perspective of life has changed. Now he wants to teach the black youth about where they came from, because he believes, if they know that, they will also know where they want to go. That’s why he wanted to do this project: to give the youth the information that they need. At 16 years old he started to give drum lessons and today, 10 years later he is still doing it. He also works in a youth prison to empower the kids to be the best version of themselves.

Follow their super active Facebook page (with more than 1800 followers!) where you can learn about black culture, music and dance! It includes some fascinating videos, photos and an article about their programmes.