0:00 foreign 0:02 [Music] 0:32 media cat analysis the media which 0:34 operate in the Catherine speak 0:36 territories 0:37 it includes analysis of the media 0:40 coverage of sensitive matters and it 0:43 also looks at the role of the 0:44 communications industry especially 0:45 paying attention in the ethical and 0:49 technological challenges faced by Asia 0:52 journalism and mediacat also works in 0:54 documentation of restrictions on the 0:57 Freedom of Information and expression by 1:00 the censorship map the censorship map is 1:03 a project that since 1:05 2015 has route to light cases of 1:09 censorship regression against 1:11 journalists and the media and 1:13 restrictions on artistic or academic 1:16 expression in Catalan countries and 1:20 since two years ago we have a special 1:23 web inside mediacat that geolocalized 1:28 every case and there are many we 1:31 categories every case and when we detect 1:35 that there is a case of censorship on or 1:38 a restaurant or a treatment to 1:42 journalists 1:43 we have a person who is the 1:46 responsibility coordinator from the 1:48 censorship map she she verified every 1:51 case and then we document it and we we 1:58 put it in this censorship map and it's 2:02 important to 2:03 to have a Global Perspective every month 2:07 and every year from this situation 2:10 the main challenge for the media in my 2:12 opinion is that 2:15 the media and journalists get to connect 2:19 with young people and find a way to use 2:22 a language to get together for example 2:24 uh the journalists or the or the media 2:28 need to know how to explain the news or 2:33 or the the or the things they are doing 2:37 in Tick Tock or using more and better 2:40 than his late the newsletters because 2:42 there are some informations that young 2:46 people is reading and not only not not 2:51 only watching videos and they they're 2:54 interesting in the news they end the 2:56 interesting in reading but in a 2:58 different way it's important that the 3:01 media 3:03 could use better this the the this is 3:09 platforms and so we could guide young 3:12 people uh to more response responsible 3:16 and quality media because this media is 3:19 all it will be also in in a space that 3:24 they could recognize and and that they 3:28 use that they are using every day

Media.cat is a critical media observatory based in Catalonia in Spain, which monitors on a daily basis how the media operates based on ethical principles. It is aimed at journalism professionals, communication sector scholars and citizens in general who are interested in having critical and analytical voices within the mass media.

I met with Carme Verdoy, Editor-in-Chief of Media.cat, in the Gràcia district of Barcelona, where they share an office with another media publication. The organisation was created in 2009 by the Ramon Barnils group of journalists with the aim of creating a “kind of an observatory”, as Carme calls it, that would analyse issues concerning the mass media, such as controversies and social conflicts and news about the use of discriminatory language. Carme says the organisation was inspired by similar centres in other countries that also document similar cases. An important part of the activity is to direct attention to restrictions and violations of freedom of speech and behaviour and to call them out.

Putting violations and censorship on a map

Although the organisation is small and only two people work full-time, their area of responsibility is large. Their websites get 150,000 unique users a year and they have around 27,000 followers on Twitter. In addition to opinion articles, interviews and videos, one very important element consists of the preparation of a comprehensive report, which summarises how many violations there are in a year and reveals various robust evidence of one-sidedness. Censorship is also being researched and the online Censorship Map has been constantly updated since 2015.

The Media.cat website also has a Blogs and Journalism section, which collects articles from dozens of blogs about journalism and media in the Catalan region. Among other topics, it also focuses on the communication industry, especially on issues such as job insecurity or harassment, and tries to echo the ethical and technological challenges facing journalism.

Speaking of media bias, Carme says that Media.cat recently published a report explaining how difficult it is to use photos of LGBTQ+ people and their families in news stories. Articles that talk about general family issues do not offer recognition of these people. In September 2022, they analysed the coverage of the employment of domestic workers in the news and found it to be more biased than they had hoped. Carme says that the Spanish media is controlled by very few people, which weakens the diversity of information.

Carme is also worried about young people’s media consumption. She finds it difficult to direct young people towards social and high-quality media channels, because they are less and less interested in journalistic channels in general. However, here she taps into the conscience of journalists, as she considers it to be their task to find a common language in which to communicate with young people. She believes that it is important for the media and journalists to create a social relationship with young people, both on media channels and in all places where young people congregate. 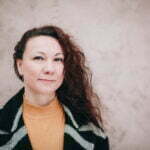 Piret works as a freelance writer, journalist and public relations professional. She holds a PhD in Performing Arts and strives to weave ethnographic perspectives into all of her writing about people in our diverse world. Having worked for quite a while in the international civic movement World Cleanup Day, which focuses on promoting waste clean-ups around the globe, Piret knows well that the dark side of life must be talked about without embellishing it.  That’s why she believes that in today's fragmented world it is very important that all people have Media and Information Literacy skills in order to make the right decisions on important life issues.

Who, what, why, where? Verification of online data

The Great Equalizer? Patterns of Social Media Use and Youth Political Engagement in Three Advanced Democracies

The freedom to speak freely without censorship or limitation.